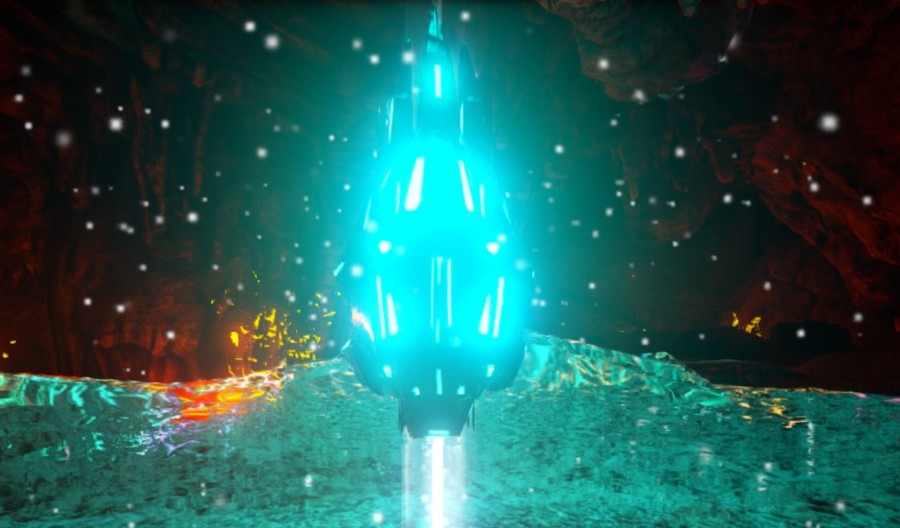 Part 1 part 2 part 3 Part 4 Part 5 and Part 6 can be found by clicking on their names if you have not read them yet.

I took the Saber out for another day of exploring. I geared up and felt prepared. I went back to that cave near me with the lava. It was still as terrifying as the first time but we got through it somehow. I found a note in there. I mean who takes the time to write a note in that place? Anyway I did it, I found an “artifact”. It doesn’t really do anything but according to Rockwell they work with the obelisks?

After the cave I wondered around a little and started to follow a path I had found. I have found many of these little paths before but never really thought about it. So lets think about it shall we? Now we know there were people before myself here, inhabiting this !Island” but how many and for how long. Paths are made by people constantly going from point A to point B to easily navigate and also from constant foot traffic. So my theory is, if there is a path there must be something at the end of it maybe? Well I followed my theory and ended up at yet another cave. This too was full of horrid creatures but my Saber was easily able to take them down. I found yet another artifact here. I think I know what my plan is. Follow the paths, after all what else do you do with a path?

Nothing exciting really happened today. I have started to expand on my house the last few days, as it is getting rather crowded with all the objects and resources I am obtaining. I tamed a few more dinos to help with the gathering of building materials. A doedicurus, an Anklyosaurus, a Beaver and I also tamed a Sarco. These last few days have been concentrating on building up and getting ready to explore the rest of the Island in the hopes of finding out the ending to the saga of those who came before me. I found another one of those weird hi tech note things too but this time I managed to figure out how to save it.

Lets see what the authors have told us this time around.

In fact, after a lengthy conversation, I daresay that Mister Nerva has the right of it when it comes to this island’s politics. As the Romans created Pax Romans, perhaps this New Legion will create Pax Arcam. Even if it doesn’t, I doubt it will harm my research, so I see no reason to interfere in this pointless squabble.“

“I admit there are times when it is useful to live among simpletons. For example, I was able to trade several gallons of my Lazarus Chowder to a group of hunters in exchange for an entire contingent of tamed gigantopithecus, and they never questioned wether it had been tested on humans yet.

Well, I suppose if they return with another batch of apes, then I’ll now that Lazarus Chowder doesn’t cause asphyxiation, won’t I? It’s not exactly a conclusive, scientific trial, but I suppose it will serve.

Unfortunately all these primitive primates have given Rockwell Manor quite the pungent odor. Isabelle said she is working on some sort of air freshener, but I hope she makes haste.“

“I admit, I have been rather coy with Mister Nerva when it comes to the true nature of the obelisks. As a military man, the obelisks would naturally be more useful to him if they were some sort of weapon, and I have made sure to allude to that possibility from time to time.

It is not as though I am selling my gracious host a falsehood. After all, I have neither any proof that the obelisks could be weaponized, nor any evidence to the contrary. Their purpose is entirely theoretical at this stage, and if twisting those theories will convince Mister Nerva to march on the obelisks any sooner, then so be it.“

So we see here in the earlier notes his interests were just alchemic, testing potions and what not on animals. We then see in just 2 notes how his relationship and feelings towards Nerva change as he goes from not caring what happens as long as it doesn’t effect his experiments, to nudging Nerva towards the obelisks for his own need to find out more about them himself. Turning into quiet the cunning character I see Sir Rockwell…

“Training grew easier once my charges began to see the results. In fact, they’ve found such a wellspring of enthusiasm that their drills and chores alone cannot contain it. This morning, I found a flag flying above the armory.

It was the symbol of the Imperial Legion, but with one of the island’s flying lizards replacing the eagle and words in a foreign language replacing SPQR. I’m told they say “The New Legion.” I admit, I smiled at the sight.

Very well then. It’s time to find out if I’ve created true Legionnaires. We march at dawn.

“It seems I was not the only one who was skeptical of Rockwell’s ability to curb my ambitions. The nearby Painted Sharks mustered up the courage to harass several of our coastal fortresses, but in doing so, they confirmed their nature. During their raids, they only attacked from the air and sea. They patently refused to set foot on land.

If the Sharks are at home in the ocean, then I will pull our coastal forces back and attack their outposts on the mainland. Once their island fortress is cut off from support and supplies, I can whittle it down to rubble at my leisure.

“I had not expected to battle another monster, much less one so powerful. Yet here I stand, victorious! My men lie dead, my beasts lie dead, yet I still stand!

Even Rockwell has never seen anything like this place. Surely it is some hall of the gods. Surely the power of the obelisks is here, waiting for a worthy champion to wield it. With it, I will not need beasts or men. Its power alone will win me this island. I need only find it, and claim what is mine.

Praise Janus for taking me here! Praise Mars for lending me his strength! I claim this great victory in your names!

So the normal Roman army stuff bla bla bla, but then note #29 caught my attention. He fought another monster, he survived. He is now in a place like no other he has seen. He mentions Rockwell has never seen anything like it either. So Rockwell is with him at this point? Where ever they are Nerva calls it a hall of the Gods? There are no buildings here (that I have found) let alone halls? Nerva say the power of the obelisks is there, where IS there? If I can find it maybe I can get home?

“The surviving villagers let me claim the lizard rider’s armor and weapons, and gave me shelter for the night. To my surprise, I understood them. Their mouths moved strangely, but in my ears I heard the language of my home. They say it is the work of the metal object in my wrist. I do not understand, but they had no reason to lie.

That night, I dreamt of the uprising, but this time I was Lieutenant Guan, lifting the siege on my village in a single, gallant charge. Yet when I woke, I was just Mei-Yin, and the villagers were gone. I am a stranger to them, but my heart feels heavier for their loss.“

I must carry on alone.“

At last we find a note from the Beast Queen herself, although it seems like this was before she acquired that title. She says she understood the villagers because of the implant in her wrist. That would explain why all of a sudden I can read traditional Chinese. Also how my very bad and rusty Latin suddenly became so perfect…

“This must seem suspicious. My existence, I mean. I have you at a disadvantage, I admit. I’m operating from a position of near perfect information, while you are…not. To put it mildly. Not that you’re unintelligent! Clearly you’re very clever, to find so many different uses for thatch.

I digress again. The point is: you have no reason to trust me. Most everything you’ve met has tried to kill you, so from your perspective, it follows that I would do the same. You humans do love your patterns.
I can’t force you to believe me. In fact, I can’t compel anyone to do anything. Even when it comes to digital systems, my control is limited. I merely pass on suggestions, not commandments.

So all I can do is ask you to believe in me, as I have believed in all of you.“

Yeah, so this one. “You humans”. Have I been abducted by aliens? Am I being experimented on? Have I been probed? Hello Mr Martian can I go home now? You win I don’t want to play anymore?! No? Huh I guess i’ll just have to carry on… I’m going to have a lie down and stop my brain from jumping to conclusions. I’m sure there is a reasonable explanation for all of this and it can’t be aliens… can it?

you can find Part 8 here.